The Park Railway Cottbus connects the parks being located on the edge of the town with each other. The park train from the district Sandow offers a connection to the Cottbus zoo and to the Branitzer park on a stretch of three kilometers.

Since June 1st, 1954, the Park Railway has driven on a track of 600mm almost daily from April until October. The steam engine is used at least twice in the month, otherwise several diesel locomotives and the diesel train called "intercity express train" run. The Park Railway has been operated by the municipal traffic service provider Cottbusverkehr since April 2011.

DISCOVER COTTBUS | a trip through the Cottbus parkland

When the Park Railway was set up to Cottbus in 1954, it only went from the Eliaspark to the zoo at merely one kilometer. The Cottbus Park Railway is grown, primarily by the Federal horticulture show (first in the new federal states), considerably to this day. And the Park Railway employees have big plans!

The business plant of the Park Railway is due to the traffic junction in the Cottbus district Sandow: the tracks of the streetcar, the Deutsche Bahn and that one of the Cottbus Park Railway, touch themselves here. At first the way still runs parallel to the regular-lane railway route before the Park Railway turns left to the station "Stadion der Freundschaft" (football stadium of the FC Energie Cottbus) shortly before the Eliaspark. 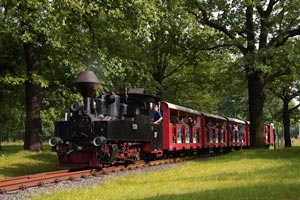 "Next station: Cottbus zoo": the possibility of going to the zoo or strolling in the Branitzer park offers itself at the station zoo. This one is the most frequented station of the Park Railway Cottbus.